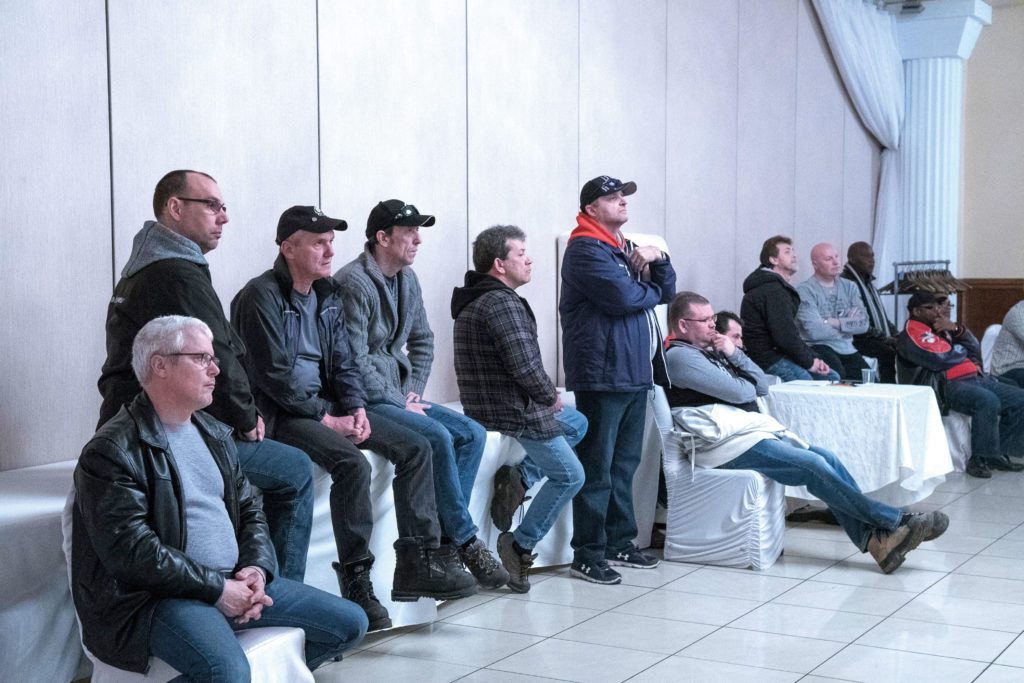 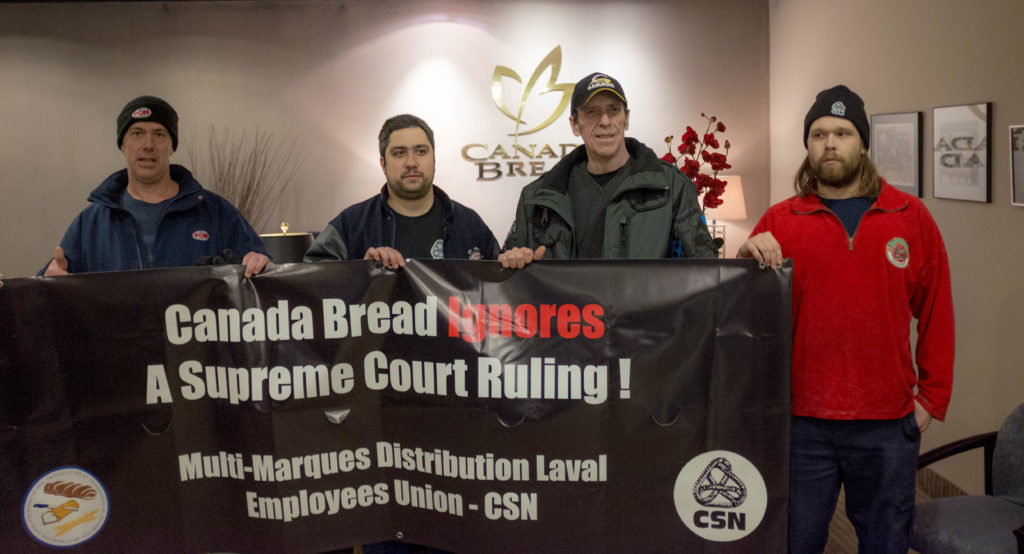 Multi-Marques, a company based in Laval just north of Montréal which makes bread for Pom, Bon Matin and Villaggio, is one of Canada’s worst employers. The company has been deliberately blocking pension payments to its retired employees since 2002, some of whom have since passed away, according to the Confédération des syndicats nationaux (CSN) and the Fédération du commerce (FC–CSN). As a result, many of the 150 members of the Multi-Marques Workers’ Union occupied the Canada Bread offices in Toronto this morning to call for the parent company and its owner, the Mexican multinational Grupo Bimbo, to meet their moral and contractual obligations, which include around $6 million in unpaid pension payments.

For David Bergeron-Cyr, Vice President of the FC–CSN, “It’s completely unacceptable that a company belonging to food multinational Grupo Bimbo would ignore the many court decisions, including one from the Supreme Court of Canada, ordering them to pay retirement pensions to its employees. We will not stop pressuring Multi-Marques, Canada Bread or Grupo Bimbo until they resolve the claims of these 150 workers. They should not underestimate the determination of the Multi-Marques Union, the FC and the CSN.”

150 employees unpaid
Some 150 employees are being targeted and are currently engaged in legal disputes with the bread company. Among them, ten are retired and five others have passed away without having received a single dollar. Almost 70 of these employees are still working, with 62 having left the company. All of them, including those eligible to receive payments on behalf of deceased workers, should have received pension payments.

The facts of the matter
In 2002, in accordance with the Qéebec Labour Code, the employees decided to leave the Bakery, Confectionary and Tobacco Workers and Grain Millers International Union (BCTGM) to join the FC–CSN. The company then started a legal process related to the retirement plan in place at the time. Today, fifteen years later, the issue is still not resolved.

In 2002, the company unsuccessfully argued that the bylaws of the BCTGM retirement plan relieved Multi-Marques of its obligation to pay off the plan’s deficit, which was caused by the recognition of prior years of service in pension calculations. The deficit amounts to around $1.6 million. Not only did Multi-Marques refuse to pay that amount into the retirement plan as required by law, but the ensuing legal battle has meant that no pension payments have been paid to these workers, despite the fact that the pension plan holds $6 million in assets.

Numerous court decisions have been handed down ordering the company to comply with Québec’s laws and judgements, including obligations related to the Régie des rentes du Québec, now called Retraite Québec. Despite these court rulings, Multi-Marques has continued to pursue legal action: its latest attempt has been to dispute the calculations established by both the actuaries at Retraite Québec and those assigned to the retirement plan.

“The employer seems to have adopted a combative attitude, conducting numerous futile appeals,” affirmed Pascal René de Cotret, president of the union representing the 150 workers. “And we, the workers, end up paying for their stubbornness, even as they make money off of our labour. The problem here is not a lack of financial resources, but rather the company’s systematic refusal to pay us the pensions that are our due, thereby penalizing workers who have worked hard for them throughout their lives.”

About the Multi-Marques Workers’ Union
The Multi-Marques Workers’ Union is affiliated with the FC–CSN, which has a membership of around 30,000 workers in the sectors of food processing, tourism, hospitality, finance, retail, wholesale and various services. Its parent union, the CSN, has over 325,000 unionized members working in both the private and the public sector.